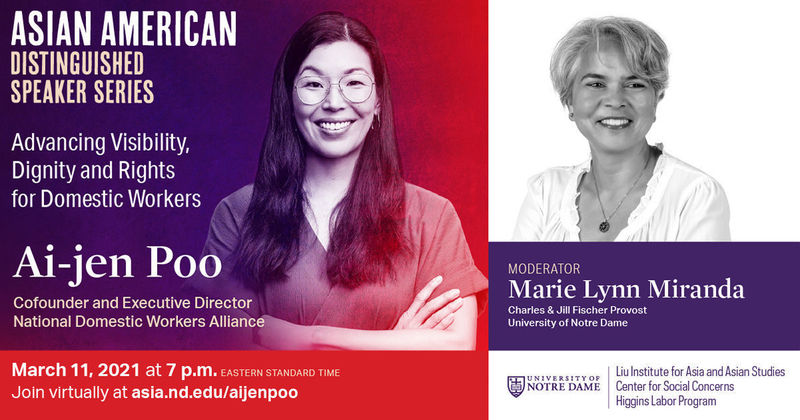 Labor organizer and social justice activist Ai-jen Poo, co-founder and CEO of the National Domestic Workers Alliance, will be the inaugural guest for the Asian American Distinguished Speaker Series by the Liu Institute for Asia and Asian Studies at the University of Notre Dame. The virtual event is cosponsored by Notre Dame’s Center for Social Concerns and its Higgins Labor Program.

Marie Lynn Miranda, Notre Dame’s Charles and Jill Fischer Provost and the University's first woman and person of color to serve as provost, will moderate the conversation, which is free and open to the public.

Ai-jen Poo is a 2014 MacArthur “Genius” fellow and was formerly named one of Fortune’s “50 World’s Greatest Leaders,” and one of Time’s “100 Most Influential People in the World.” She has served on the Bill and Melinda Gates Foundation’s Partnership for Mobility from Poverty and currently serves on the Ford Foundation board of trustees. She is author of The Age of Dignity: Preparing for the Elder Boom in a Changing America.

Sponsored by the University of Notre Dame's Liu Institute for Asia and Asian Studies, Center for Social Concerns and Higgins Labor Program